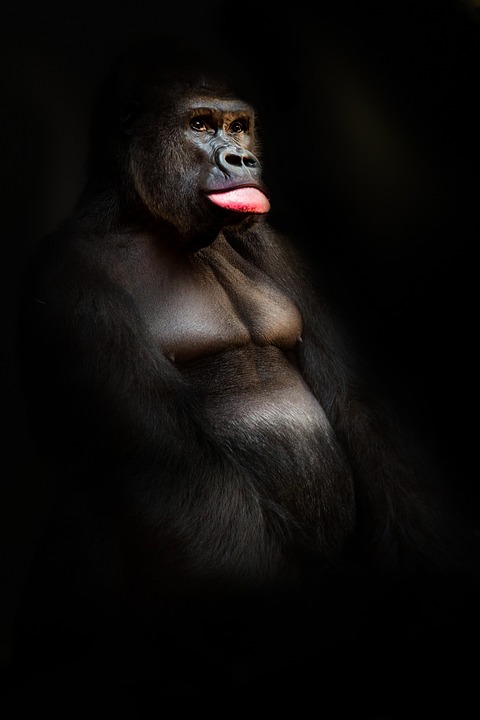 I recently came across the Non-Human Rights Project (NhRP). Essentially they are proposing we treat animals such as elephants, wales, dolphins and, most notably, chimpanzees as “persons”. Steve Wise, founder of NhRP, made it his mission to treat them as civil cases much like the women’s rights, civil rights, and gay marriage movements. It isn’t quite the same, of course, as he isn’t saying the personhood for animals is at the same level as the previously mentioned, but he is saying that we have different concepts of what a right is and those groups eventually found legal rights in America.

It’s funny to me that this search is even a search. I think his argument should be pushed through but probably not for the reason you think. You see, I, of course, have empathy for chimps and other animals great and small, however, I also see that we are all animals.

I have this quirky thing I do sometimes. Unfortunately, I am going to make you step into my head.

You walk down the street and there are animals everywhere. Chimpanzees skulk along busy sidewalks as they chip and chirp to one another. They stop into small stores and grab a bite. The smell of exhaust permeates your senses and they drive through the busy metropolitan streets that other chimpanzees built by sheer mental fortitude.

You walk further down the street and look down an alley. There, in the darkened hall of brick and mortar are two chimpanzees brutally assaulting another. It feels barbaric and you want to stop it but the sheer brutality of it makes you realize how much of an animal they really are. How uncivilized they are. You run away. You cross street after street as you try to forget the tableau of violence you stumbled upon and end up at a small park. You see chimpanzees roaming around. They crawl up trees and down them. They run openly in the park. A chimpanzee sits on the black, metal bench across from you. In her black fur covered arms, two small brown eyes blink back at you. She begins breast feeding the small chimpanzee. She looks at the baby with delight. Her eyes are large and round with a watery glisten to them as she looks at her tiny progeny.

You look down at your feet and, when you look up, you are surrounded by monolithic grey creatures. Their tusks jut out in front of them and their trunks sway back and forth. You’re in a grassy area surrounded by tombstones. In front of you is a small mound about the size of you. A tombstone just behind the dirt mound says the elephant died at the age of two. You see them walk in time as the elephants’ trumpeting trunks scream into the darkened sky. They circle the grave shaking their heads back and forth crying out in emotional pain. They’ve lost something. They’ve lost someone.

You’re back. You’re reading this and wondering why I’m juxtaposing these things.

I only spoke of this, not to show you how close to humans they are, but to remind you of the animal that YOU are. We are animals navigating the world. We give meaning to society because it’s a natural thing to do in the animal kingdom. Insanity is defined by Miriam – Webster as extreme foolishness or irrationality. We share over 99% of our genes with Chimpanzees and yet we cage them. We cage our own creatures because we fear them. In Africa, Human Zoos were quite common just a century ago. These dark skinned people looked so odd and different. They dressed strangely and worshipped different gods. They were lesser. It’s archaic to say that now and even more so to imagine it happening again. Creatures caged simply for the oddity of existing.

We make laws not meant for protecting them as entities but as things.

How can one thing hold so much over another. If they’re “things” then so are we. Look at how similar we are in “thingness”.

Replace the city street scene with humans. Is that brutality still animalistic or is it just “human nature”? Is it a mother feeding her child or is it indecency? Is it a funeral or are they just upset animals?

I could show so much more here of how we are nothing but animals who out number most semi-large mammals and how we are ruining the planet for the others.

In the end, this whole post was meant to do one thing. It was to show you that you, an ape, can read what another ape wrote. That communication is happening and you understand me much like every other animal on earth understands those within their own species.

This is your reminder that you are part of something bigger in this world.

Remember that you traverse the same ecosystem as every other creature and you are just as fragile.

Remember how it feels to lose another human creature. Then think of other animals’ losses and how much they feel.

Remember, when you stroll through the zoo, that you share 50% of your genes with every creature there. Expand that to every living creature on earth. One creature looking back at another.

This is your reminder.

This is your memento animalis.